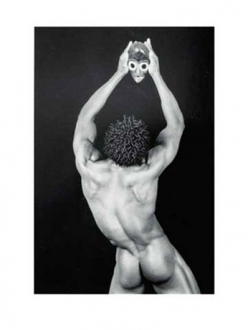 Antoine Tempé's photos of dancers in motion are spare and beautiful. His lighting and free compositions bring out the strength and beauty in the human form through motion.

"Born in France, Antoine Tempé moved to New York City in 1983 and started taking photographs in 1989. In the early '90s following regular publications in the french PHOTO, and his initial success documenting the New York night life for European magazines, he stared photographing his dancer friends in his studio. He was soon working with various New York base dance companies both on commercial and personal projects, with his photographs appearing in American publications.

In the year 2000, Antoine embarked on a on-year photographic journey through west Africa and Madagascar. From this trip he brought back two different bodies of work currently exhibited under the titles 'Dancers of Africa' and 'African Journey' "