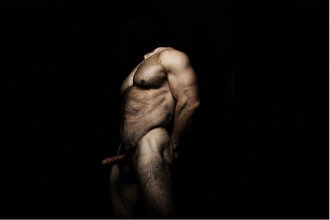 I discovered New York based Charlie Rogers's work on Flickr. My first encounter was page after page of amazing and moody images of muscular men in white briefs. As I followed his photostream I watched as he introduced more themes and indeed more nudes - the briefs have endured as well. Early on I contacted him and asked him about his work, particularly the underwear obsession. His reply:

"And then there's the underwear. Yes, I have a fetish for white briefs, but aside from that, I think it can make for an interesting statement in a photograph. I'm not at all opposed to shooting guys nude, and you correctly assumed that a few of the models I was just too afriad to ask to get naked, but even if there's going to be nudes, I'm still going to want to do underwear shots. I wish there was more underwear in your photos, but a fetish can be a lonely place. :) (And mine is oddly specific, as they can be... for example the photos of David G. you have in underwear are not the right style to satisfy the fetish. Beautiful work, and some very hot, but they just don't "click" for me the way they could have if he'd just been wearing a different pair of shorts. I find this funny."

On his website, which sadly doesn't much of his amazing work with men (see Flickr for that) he says:

"Most people call me Charlie. I'm a photographer based out of Brooklyn, NY. I was born with a scar on my face and probably as a result, I'm drawn to the imperfections that make us all beautiful."

Recently Charlie has been working on some new projects - one revolving around smoking bodybuilders and the other a more moody and figurative body of work (the photo I feature here is from this series).