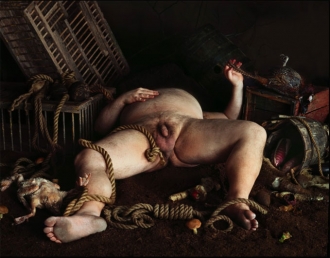 Bark's photos are redolent of the tableaux of the great masters and their more modern descendants. While this is a bit of a clichéd comparison, it does hold true. The photos are constructed with all elements chosen and placed. Bark's tastes tend to the lush and corporeal. Through his photos, he speaks of warmth and decay, of flesh and of flavour. His photos are of situations and elements rather than of the people in them. Some of his work is epic and allegorical and, as if in counterpoint, some of it is detailed and intimate, but it's all rooted in the natural. In the same way as Peter Greenaway's Drowning by Numbers confronts the viewer with a rich almost suffocating milieux, Bark almost overwhelms the senses.