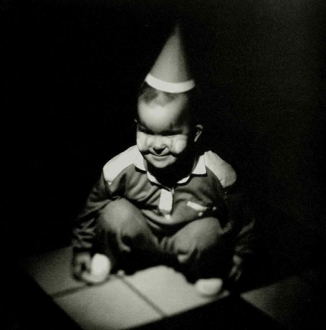 Mahurin's photos are pretty much the diametric opposite of mine. His images and graphic work show a darker and more complex engagement with the world around him. His photos are "in" and "of" the "instant". Expressions, falling objects or animals and movement all figure highly and he freezes those impossible moments. They are like nothing you are likely to see, but they are part of what is going on all the time. He just happens to be looking in the right (or wrong) direction.

Matt Mahurin: "Growing up, my first love was painting. What I really fell in love with was the actual process of making things, the discovery and the challenge of it. For me, it wasn't really a conscious decision. It's not that I'd conquered everything that I needed to do in painting, because you spend your whole life developing that. But the repetition of the process of laying out, doing the drawing, painting on top of it-- the same ritual. So basically I just changed the ritual. I changed the process, which involved the camera, involved the print. That was the first transition I made that later on became repeated several times. I went from illustration and using photography in illustration to just doing pure photography. The process changed from being alone in my studio working, to when I started doing photography it involved a lot of photojournalism or location stuff. All of the sudden I would find myself in a Texas prison or an abortion clinic or mental hospital or a different country, and you give up a lot of control with that. So that's how my process changed once I got into photography. Then I was at the mercy of what was in front of the camera, and I had to adapt to that. When I was painting, the limitations were the limitations of my own abilities; my own imagination. There was a trade-off. Because once I went out into the world I was supplied with all this raw material that I could pull from, but I didn't have control over what was in front of my camera. I had to kind of pick and choose those moments. And then I ended up repeating that same process when the computer came along and I took that on. It started to involve painting and photography inside the computer, so it was combining three different things. I went from painting when I was by myself, to photography when I would go out and interact with the subject, and then the third area, which was doing filmmaking, where I actually had to have a crew. So then I not only had to deal with the additional energy and forced unknowns that were in front of the camera, but I also had to have more people behind the cameras. Then it became much more of a social environment, and I had to delegate and work with people, so the process kept growing and changing. This went on from the time I got out of school and started doing paintings alone in my studio, to when I was on a film set with thirty or forty people and all this equipment and money being spent. I had evolved from this place where I was by myself in a studio, to where I had a production company and full-time people working for me. I got to the point where I had to throw everything away. I got rid of my studio, I got rid of my company, I got rid of the person that worked for me, and I basically started from the ground up again. Filling out my own FedEx forms, taking my own darkroom towels to the laundromat, washing them myself rather than having people doing all that stuff for me. It was a way of reconnecting. The process had actually come full circle, so I had to relearn those skills all over again. It was challenging and frustrating, but it was also very exciting that I was capable of letting go of all that stuff that I'd built up. So it really was about more of an attitude of process-- of changing processes as opposed to any particular medium."