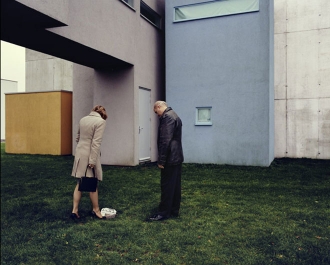 Tabrizian's strangely staged and yet familiar imagery is great fun. She reminds me a great deal of Gregory Crewdson's work, but on a more accessible scale. Londoners have seen these scenes time and again, but she manages to freeze them so that they can be seen for what they are.

From a review of her book "Beyond the Limits": A recurring theme in Beyond the Limits is an investigation and questioning into the notion of 'model' minorities who are both simultaneously marked and unmarked. These citizens appear as the by-products of their society, and deploy the high gloss, glamour and artificiality of the post-modern corporate entity otherwise known as late capitalism. These "models" have a mutant like quality whereby men, women and children are all unilaterally attired in the powerhouse dress of the business suit which suggests nothing and everything at the same time. In one photograph from Beyond the Limits, 2000 photographic series a WASPY father sits with his two sons at supper time with a bullet in his head echoing suicide and a possible trigger happy alternative to the absurdities of daily life. Coupled with this alien existence Tabrizian also creates an architectural cityscape environment through photographic installations that mirror spaces that are devoid of humanity where the only exchange that occurs is in technological and financial commodities.