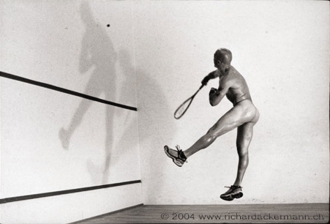 Photographer specializing in athletes - captures form and muscle very well. From his site: "Born in the German part of Switzerland in 1965, Richard Ackermann has lived in Lausanne for over 15 years.  After having been a grade school teacher and studying at the Conservatory, he currently works as a lyric singer at the Operahouse of the Swiss capital, Bern. Completely self-taught, Richard's initial foray into photography took place almost 15 years ago, and since that time he has worked continually to expand and perfect his technique.  Since the beginning he has concentrated exclusively on photographing nudes in black and white. After years of working primarily in a studio with artificial light, he is now increasingly working outdoors at distinctive locations, often with narrative motifs. Due to its incomparable beauty and reproductive quality, Richard is a promoter of the "old-fashioned" silver plate. He creates each photo himself, working through all the stages of production from developing the film to the final framing of the finished image."