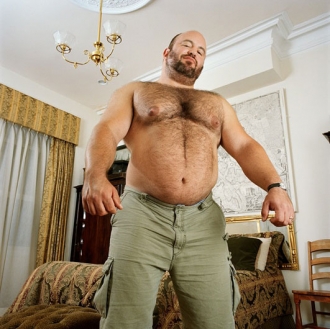 Sean has a series of projects on his site that show a breadth of composition and with a modern and un-fussy approach. Very enjoyable.

"Sean M. Johnson was born in Providence, Rhode Island (1982). Growing up with his working mother and two brothers, Sean gained great insight into caretaking and family structuring by assuming many responsibilities for his brothers. With the discovery of art and enunciation of his sexuality, Sean began to challenge his views on normalcy, family values, and what it means to be outside the norm.

Going off to college and pursuing his career as an artist, Sean found photography to be a natural expression for his views on identity. In 2004, Sean obtained his BFA degree from the University of Rhode Island. Working within photography, Sean branched off and started to explore the different media of video, performance, and installation during his education at the School of the Museum of Fine Arts, Boston where he is finishing an MFA. These new media provided him with the tools to broaden and express defined, detailed concepts related to the male form, identity, and conceptions of gender and sexuality.

His work has been shown in New York, Houston, Boston, Israel, Madrid, and on various Internet sites. As an artist, he seeks to express his ideals to a broader audience around the world and articulate the struggles queer men may face, and promote understanding of these differences. Sean currently lives and works in Boston, MA."