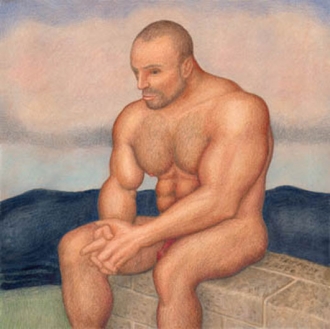 From his site: "Male nudes are such a visual feast that it is a shame that so many people are
reluctant to buy them, show them off, or paint them. I like to use them
not only for visual pleasure, but to tease the viewer with an unexpected context.
I like to show saints as carnal creatures, and I like tweaked versions of ancient
Greek myths. I like modern gay leathermen mixed in with traditional Christian myth.
I like ambiguous subjects, such as martyrs who may or may not be saints, and
S/M situations which may or may not be Christian. The art museums of Europe
are filled with depictions of torture and S/M, which people accept as religious art.
How different is it when the saints' attributes are removed?"