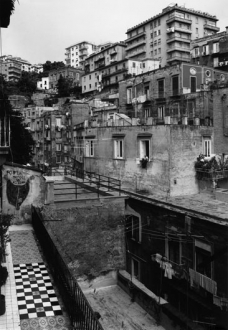 I'm not alone in appreciating Struth's profoundly beautiful photographs. My favorite images of his show poignancy in simplicity, and the power of observation - so much to see in a simple street photo. I've seen some of his work in person and his huge photographs have the ability to overwhelm you in their detail.

From the Tate Modern's Exhibit of his work: "Struth studied at the Düsseldorf Academy, where he was taught by Gerhard Richter and Bernd Becher. During the 1970s, he began to take photographs that explore the character of urban spaces, and what it can reveal about the history and identity of communities. Beginning with the streets of Düsseldorf, he gradually expanded his project to include other cities in Western Europe, the United States, and Asia.

In these photographs, buildings and cars become as evocative as human faces. Accustomed to hurrying through the city with an almost unseeing eye, we are encouraged, in the artist's words 'to give pause, to move to investigative viewing'. Struth also makes portraits of friends and acquaintances, usually in intimate gatherings, as if contrasting the public environment of architecture with the private space of the family. These photographs are explorations of social dynamics, showing how people within a tightly-knit group arrange themselves in front of the camera."