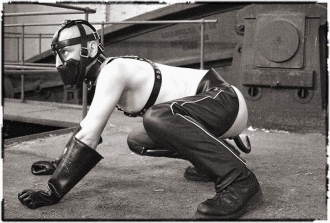 Extreme imagery of the gay fetish world is not to everybody's taste, and Ulli Richter certainly pushes the boundaries, but if you can stomach the content, the images are amazing. Richter explores pretty much all of the fetishes you can think of, and several you hadn't, but between is more formal portraits, his set pieces and his photos of "play scenes", he manages to bring alive a sense of urgency that few others in the genre have managed to do. (Why does al of this stuff come out of Germany?!)

"Ulli Richter was born in a small East German village on the Czech border. In his early years as a child he was widely travelled accompanying his parents to most countries in Eastern Europe. This fostered his interest in photography, in particular travel photography which led him to develop a broad portfolio of architectural work.

A keen learner and ambitious connoisseur of life, Ulli sought a freer form of artistic expression. With the fall of the Berlin Wall in 1989 came fundamental changes in his personal life. Having been confined by the restraints of a communist society, he was now free to leave for foreign shores and look for new challenges in the field of photography.

Ulli moved to London in 1995 and today works as a commercial lifestyle and advertising photographer. Yet his artistic work encompasses the world of London's subculture. Having gained a new sense of spirituality due to the personal experience of his parents' achievement in the field of Radionics, he now relishes the privilege to be one of the leading portraitists on the international fetish scene.

Ulli's work has been shown in numerous exhibitions and is part of various private collections around the world. Ulli is proud to be associated with RoB London as well as SPEXTER Munich, both for whom he has produced iconic advertising campaigns.

Whether it's commercial or kinky, Ulli continues to apply the highest standard of traditional photographic skill to produce outstanding images with a darker edge."